Objects of my Affections

Nonetheless, Zack was accepted at and began preschool, taking along  an engineer’s red  bandana to protect the opening in his neck when he played in the sandbox in his striped overalls.  As  I stood back  to watch on the first day, I couldn’t hold in the  tears as Zack played joyously alongside  normal children, children who had healthy beginnings. Years of worrying about his survival and development were finally at an end. And now I had two and a half uninterrupted hours to work in my studio each morning. Jewelry was small enough that I could get quite a bit done in that amount of  time, and the silver soon held its own as reduced sculpture — small bits of meaning, not simply decoration. I felt myself return to normalcy, saw a window opening into my future: my son would be robust, I would be a working professional artist once again. I would be able to leave my marriage, escape my husband’s drinking which had worsened after Zack was born. After all, except for the diarrhea, frequent ear infections and Zack’s small stature, my exuberant son seemed to be thriving.
Before he began his second year of preschool, in  August of 1986, Zack had surgery to close the trach site. There was something abnormal in the blood tests, but his pediatrician told us not to worry as she ordered more testing, “He is a sick kid who has gotten better. He can’t have it.”  But at three A.M. I awoke and put together the symptoms and the transfusions and knew, days before the results were in.  My boy had AIDS. It was just before his fourth birthday Our doctors had no treatments of any kind to offer. Nothing. Absolutely  nothing.
While I grasped at straws to keep my son alive, researching fruitlessly, silver smithing took on new meaning. Metal seemed a firm, if  temporary, handhold out of unbearable maternal powerlessness. My Saturday class was sacrosanct throughout Zack’s deterioration, the only respite. While I was there, I concentrated on the work in front of me. Sawing, sanding and soldering almost drove away the  ache in my chest for three whole hours. The control I lacked over AIDS, I could exert over metal; I could conceive and bring a piece to fruition in a day. As my boy’s life was slowly extinguished, small sculptures were born and completed: pendants and brooches in the shape of torn or broken hearts tenuously stitched together. 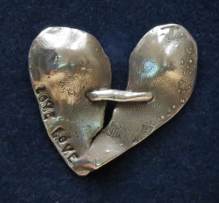 I made a bracelet for myself that Zack  knew was about him, stamped with old typewriter keys in soft wax:: Z… .My  sunshine…. you are my sunshine.
By the time Zack was four and  a half, I had experimented with unusual ways of creating waxes for casting. When I poured  melted wax directly into hollow forms scooped out in clay, I realized that the process would enable Zack to make jewelry with me. He had inherited my artistic genes. Obsessed by trains, he drew train tracks at age two and a half. By four, he loved to paint and draw trains and cats and his stuffed panda, Bumby. He even drew a special train “For my Momma” with pink hearts drifting out of the smokestack.
Seated in my studio, Zack and I rolled and flattened a ball of clay with a rolling pin, just like play dough. Then I showed him how to use a pencil to incise in the clay. As he bent over the gray slab to draw a train, his brown bangs shone with gold in the sunlight streaming  through the windows, hid his brown eyes, but not the dark crescents beneath them. I gave him a serrated tool to poke a little frame around his image, then we rolled snakes of clay to build a dike, poured the melted wax  inside, let it cool and washed the clay off the positive wax  “pattern” which would be cast in metal.
Since the  AIDS diagnosis, I had frantically investigated alternative treatments, diet and nutrition hoping to keep him alive until a medicine was found. But I was fighting a losing battle – there wasn’t much to offer a child. Even acupuncture needles would have added to his trauma; energy healing was all I could provide. Now Zack and I had a new ritual: after dropping off our wax  patterns for casting, or picking up our metal in Glendale, we drove to the nearby Healing Light Center for  the energy work which relaxed Zack  and made him feel temporarily better. Last, if he was able,  we headed to Griffith park to ride the trains.
On  Saturdays, in the metal studio, the sterling heart-shaped brooches and pendants I created became  attenuated and fragile.  At home in my studio, Zack drew in the clay, despite the pain meds that made him groggy, while I finished , oxidized and polished his pieces. We made bronze train belt buckles for his dad and silver train pendants for me and friends. The  raised bumpy edge around the medallions had a bead-like quality that inspired me to buy antique silver and glass trade beads from which I hung Zack’s trains, the cats for his aunt and his grandmother, and a big shining sun for me.

It pleased Zack to see me wearing what he created. But for him, this silver jewelry was neither more nor less special than the brooch he made in school of macaroni and gold paint on cardboard, a safety pin glued to the back. But, for me, I was trying to save bits of my boy in sterling , a material that would not crumble, fade or shrivel. These talismans would harbor my child, his sun face smiling against my breast long after he was gone. As a mother, I could not stop his illness, nor save him; as an artist I tried to save our love, to freeze our time together in the hardness of metal.
Zack’s last drawing, done a day or two before he died  in my arms at home, was an image of a train cracked into shards,  as shattered  as his body. After Zack’s death we were invited to participate in a film and then a gala benefit in Washington D.C. for the newly formed Pediatric Aids Foundation. I wanted to wear a special  Zack necklace for this black tie event. I made a mold  and duplicated his smiling sun — a rectangle of about an inch by three inches –  and had it electroplated in the deep yellow of 24 karat.
On the night of the event, Zack’s golden sun shines on my breast. I never could have imagined, on that morning  I awoke with an image of a simple silver belt,  what a gift a dream  would offer: not only a return to an artist’s life, but a place to express, hold and transform  grief. If it  were  not for that dream, I would not own this object that brings solace at a time when I would gladly give up being an artist forever to have my boy back.
On that night of  the  gala, I can’t imagine that someday I’ll become an art psychotherapist, that I will help others find their own generative processes to transform  pain and loss, to make their own containers for grief. That night, all I think of  is my son.
As I walk up the steps into the celebrity-filled party, surrounded by press, flash bulbs and television cameras, a woman reporter says to me: “What a lovely and unusual necklace you have!”  I reply, “Thank you. My son Zack, who died of AIDS at age five, created this.”  The  brief exchange carries enormous charge for me. It means that my boy has not disappeared without a trace. His presence on the planet has been noticed, his death noted. Perhaps our necklace will be mentioned on the late news and, for an instant, someone will think about a little boy who shone like a sun in his short time here.